I was late to capture the color. There wass a beautiful brand of bright pink, which would have given this photo a lot more character. But I underestimated the length of my walk.

I was ready to smash my alarm this morning. What a beautiful year, but living by the alarm day in and day out is difficult.

With the smash of my first, would I be able to shatter the screen on my iPhone? I wouldn’t do it with the knuckles, but with a downward strike using the buttom of my first. Ok, what is the bottom side of a first? But you know, the edge of my pinky side, the boxer bone as its called, the one I broke once while punching a padded gymnasium wall in seventh grade after missing an easy layup playing basketball. That bone.

Here’s how it goes down.

There are always at least two alarms set. Sometimes three. Sometimes four if I know it’s going to be a night with little sleep and an early alarm. 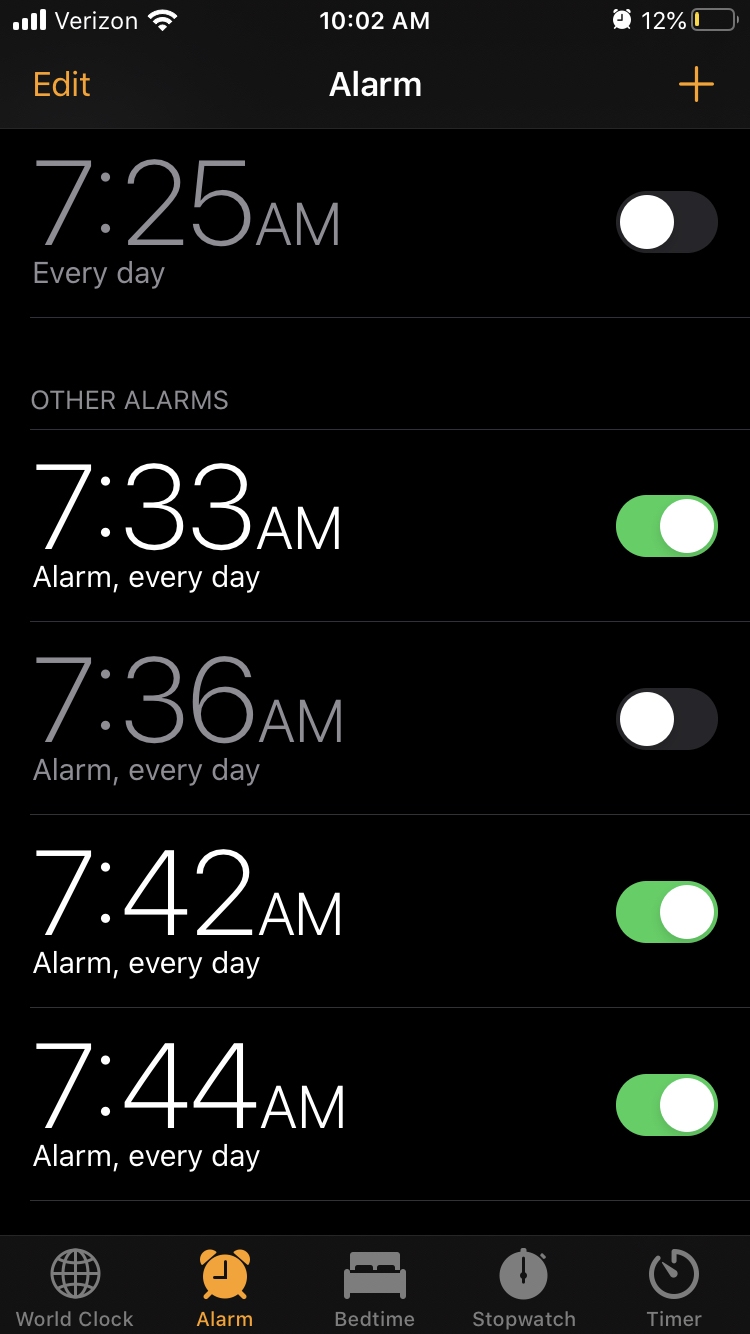 Now these are all pretty late. Remember, every sunrise of June was before 6AM. Getting out the door thirty minutes before sunrise meant alarms at 5:15AM and earlier.

An anonying part of this project is every couple days leading up to June 21 I would have to update the alarm times a couple minutes earlier. Since then, I set them a couple minutes later each day.

Of course, I could be getting up at 5AM morning this entire year. But the thing is I don’t desire to do anything before sunrise. I want the sunrise to be the first thing I chase during the day. I don’t want to do chores or check emails before sunrise. The idea was to start each day outside, before anything else. Once, I got a donut before beforehand. Once.

After the alarm sounds, I do the bare minimum. Before clothes go on I go to the bathroom. Turn on a light or two and peak outside to see what the conditions are like. Clothes go on, check camera batteries, shoes go on, and I’m often out the door within five minute sof my alarm sounding.

That is, assuming I get up with the first alarm.

I managed to get through college without ever using a snooze button. I don’t think I knew how it worked. It was my first career job in Lansing that taught me what a snooze button was for.

Now I use it often. Usually once, sometimes twice or three times in the morning.

These are the alarms I use, all default alarms on iOS.

I usually start with a soft and easy alarm. One of these two usually do just fine. The first is named Ripples and the second is By the Seasdie.

When I need to ramp it up a little bit, my third alarm is the iOS Cosmic alarm.

Sometimes, I get especially despearte and set a specific alarm. This is the obnoxious alarm I use. When there is a 3:30AM wakeup call, I’ll crank up the alarm volume as well. The jolt of waking up this way usually gets me out of bed faster and gets me going rather than the softer alarms. But it is obnoxious, it’s not a good way to wake up everyday. Or maybe it is.

And on some days, I’m out the door so early that I’m walking along the shore and more alarms are still going off in my pocket.

And then there are the days where I’m really panicked. For much of the summer I was so fearful of sleeping through an alarm (again?). On those days, I set my alarm on my old Sony Dream Machine, the same alarm clock I’ve had since I got my very own bedroom going into seventh grade. It still works like a dream. It sits on the otherside of the room so I’m forced to get up.

What was particularly stressful was the hot summer nights. Anytime it was hot I would turn on my big box fan. I sleep much better, but it’s loud and I feared it would drown out the sound of my alarm. Dream Machine, max volume!

This is the part of the project I look forard to ending. I’d still love to get up early next year. I’d still love to chase sunrises. And maybe I’ll keep going. But there is an incredible amount of stress in sleeping through alarm and a sunrise, especially this late in the project. Maybe next month I can wake up without the worry of missing something.

My FOMO is FOMTS (Fear of missing the sunrise).

Also, I never want to hear these alarms again.

Related sunrises are currently genearted from location, sunvisibility, and date metadata. This works really well for only some sunrises. One of my goals is to build a robust Sunrise Library with advanced sunrise matching. A BugsyLand™ membership can help me get there faster.

A single First Edition print will be created for each sunrise. Once sold, I will provide 18x24 prints in an open edition. Pricing for 2019 first edition prints are a little different. Prints range from $1 for January 1 to $365 December 31.

Save 20% instantly with a BugsyLand™ membership